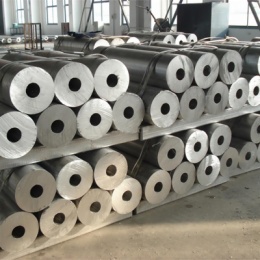 Aluminium Pipe/Tube
If none of the above grades, sizes, or products ,you can contact us directly, we will offer good advice !
Aluminium: the essentials
Pure aluminium is a silvery-white metal with many desirable characteristics. It is light, nontoxic (as the metal), nonmagnetic and nonsparking. It is somewhat decorative. It is easily formed, machined, and cast. Pure aluminium is soft and lacks strength, but alloys with small amounts of copper, magnesium, silicon, manganese, and other elements have very useful properties. Aluminium is an abundant element in the earth's crust, but it is not found free in nature. The Bayer process is used to refine aluminium from bauxite, an aluminium ore.
Aluminium: historical informatio
Aluminium was discovered by Hans Christian Oersted in 1825 at Denmark. Origin of name: from the Latin word "alumen" meaning "alum".The ancient Greeks and Romans used alum in medicine as an astringent, and in dyeing processes. In 1761 de Morveau proposed the name "alumine" for the base in alum. In 1807, Davy proposed the name alumium for the metal, undiscovered at that time, and later agreed to change it to aluminum. Shortly thereafter, the name aluminium was adopted by IUPAC to conform with the "ium" ending of most elements. Aluminium is the IUPAC spelling and therefore the international standard. Aluminium was also the accepted spelling in the U.S.A. until 1925, at which time the American Chemical Society decided to revert back to aluminum, and to this day Americans still refer to aluminium as "aluminum".Aluminium is one of the elements which as alum or alumen, KAl(SO4)2, has an alchemical symbol (the symbol to the right shows Scheele's symbol, alchemy is an ancient pursuit concerned with, for instance, the transformation of other metals into gold).Aluminium was first isolated by Hans Christian Oersted in 1825 who reacted aluminium chloride (AlCl3) with potassium amalgam (an alloy of potassium and mercury). Heating the resulting aluminium amalgam under reduced pressure caused the mercury to boil away leaving an impure sample of aluminium metal.
Aluminium around us
Aluminium may be involved in the action of enzymes such a succinic dehydrogenase and δ-aminolevulinate dehydrase (involved in porphyrin synthesis. Aluminium compounds are toxic to most plants and somewhat toxic to mammals. Aluminium has been linked to Alzheimer's disease (senile dementia).Aluminium metal is not found as the free element, however, aluminium is an abundant element in the earth's crust. The most important ore is bauxite.Abundances for cobalt in a number of different environments.
Physical properties
Heat properties
Crystal structure
The solid state structure of aluminium is: ccp (cubic close-packed).
Aluminium: orbital properties
Aluminium atoms have 13 electrons and the shell structure is 2.8.3. The ground state electronic configuration of neutral Aluminium is [Ne].3s2.3p1 and the term symbol of Aluminium is 2P1/2.
Isolation
Isolation: aluminium would not mormally be made in the laboratory as it is so readily available commercially.Aluminium is mined in huge scales as bauxite (typically Al2O3.2H2O). Bauxite contains Fe2O3, SiO2, and other impurities. In order to isolate pure aluminium, these impurities must be removed from the bauxite. This is done by the Bayer process. This involves treatment with sodium hydroxide (NaOH) solution, which results in a solution of sodium aluminate and sodium silicate. The iron remains behind as a solid. When CO2 is blown through the resulting solution, the sodium silicate stays in solution while the aluminium is precipitated out as aluminium hydroxide. The hydroxide can be filtered off, washed, and heated to form pure alumina, Al2O3.The next stage is formation of pure aluminium. This is obtained from the pure Al2O3 by an electrolytic method. Electrolysis is necessary as aluminium is so electropositive. It seems these days that electrolysis of the hot oxide in a carbon lined steel cell acting as the cathode with carbon anodes is most common.
Aluminium isotopes
Table. Stables isotopes of cobalt.
We can supply:
1.Big Size
2.Delivery within 15days
3.Payment Terms: L/C,T/T
4.Port: Shanghai,or is any port in China
5.Trade Term；FOB CIF CFR DDU
6.MOQ：500KG-1000KG
Some information may be incomplete on the website, you can send details including your phone by e-mail, ygalualloy@gmail.com
we will respond to your demand within 12 hours!